So what’s the deal with…

Having lived in Indonesian for nine months here few things I have yet to full understand about everyday life here:

Why do my nails and hair grow so much quicker here? There definitely and answer for this somewhere on the internet but I kind of like the mystery,

Why are there so many employees just standing around at the grocery stores? Seriously, there are always about three-times as many staff as there needs to be and none of them seem to be doing anything 90% of the time.

Why are drivers so terrible here? If you only knew Indonesians from the way they drove, you’d think they’re the rudest, most inconsiderate, and clueless people in the world. Fortunately none of these things are even remotely true but driving here is a nightmare. For example drivers of both cars and motorbikes rarely look when entering traffic and it’s not infrequent for cars to just turn around in the middle of the street. Which begs the question…

How are there not more traffic accidents here? Ok, so I did see a dead body in the middle of the bypass (main road), a while back, and when there are accidents they’re usually pretty bloody (motorbike vs. car never ends well for the former) but drive here for more than five minutes and it becomes clear that there should be more crashes, accidents, bumps, etc. than there are.

Why is always so hot here? Because we’re so close to the equator, I know, so this is more a rhetorical complaint than anything else…

Why do people here hose off their driveway/street? Come mid-afternoon (sore) people just walk around with a hose to wet any paved area they can find. My first guess is that they’re trying to clean but I’m not sure it really accomplishes that. My second guess is to cool it down (see above).

Why is it cool to have contraptions attached to your muffler that make an absurd amount of noise? Funny story about this one, apparently there was a recent traffic stop in Denpasar where the police were making whoever had one of these get down on their knees and put their ear next to the muffler. Maybe this is a bit cruel but I think the amount of nose these things make is equally atrocious so the bastards deserve anything they get (or lose, as in hearing).

Why do people living here wear sweatshirts in the middle of the day? I guess they might be used to the heat but still let me reiterate how hot it is here… Really hot. And on the same train of thought…

Why do people prefer hot drinks to cold ones? This confuses the hell out of me. I try and drink everything with ice except for a morning coffee but it’s extremely common here to have hot tea with a meal. Bananaland…

There are certainly more, but since I can’t think of any right now I’ll leave them for another time. The mysteries of life here are never-ending…

So far Semawang Stories has been a little light on the actual stories and events so this week I thought I’d share an evening from a couple weeks back.

Bali is famous for its dances. Most are performed as part of rituals with deep spiritual and symbolic meaning and others are for entertainment. There have been dozens of ethnographies detailing their meaning and purpose. This is not one those. 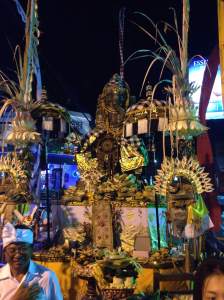 The statue of Ganesha, which normally causes minor traffic confusion anway, was decked out with offerings while the street was shut down. Also, the guy in the foreground is wearing an udeng.

A few weeks ago, Semawang hosted its own evening of dances. Actually there were several evenings of events but I only attended the one. The (for lack of a better term) festival, surrounded a purnama ketiga or ‘third full moon’. I won’t pretend to know the significance of this or why it was being feted but it was clearly important enough to block the main intersection with a substantial tent and force a traffic diversion.

In the tent there was a stage with a none-too-authentic Styrofoam set that belied the true localness of the atmosphere. The Semawang banjar of Sanur is a pocket of Balinese more or less surrounded by hotels, villas, and restaurants but locals have more or less held a large swath of real estate a couple hundred meters from the resort-lined beach.

The whole banjar, decked out in traditional garb, gathered for the evening’s entertainment. The men in white shirts, sarongs, and udeng (a folded cloth headpiece) stood or sat at the back, while the colorfully dressed women took up the 20-or-so rows of chairs.

By the time I arrived around 9, the dancing had already begun with kids, seemingly under the age of five, decked out in the elaborate gold and making the smoothly sharp and intensely choreographed movements that define Balinese dance. 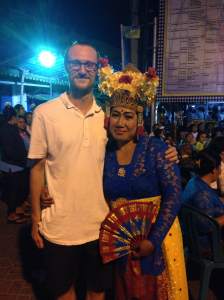 YT standing awkwardly with Ibu Wayan before she takes the stage.

The reason for my attendance on this particular evening was the promised performance of friend and neighbor. As dance followed dance, I starting noticing tourists creeping closer with smiles of awe and good fortune until they were literally against the stage, filming and photographing what they were lucky enough to have stumbled across. One (I think) Japanese guy almost tripped onto the stage with enthusiasm. But despite this secondary entertainment, there was still no Ibu Wayan (That’s my neighbor’s name, also my landlady’s name. The name means “first born” so there are a lot of Wayans around).

After a quick run back to the house, I was told that the ibus were up next. It seemed that the program was scheduled according to age and with an older troupe on stage when I returned (the stage was abotu a two-minute walk away) it seemed logical. An ibu did come out but it wasn’t Ibu Wayan (well, maybe it was, but not our Wayan) and she didn’t perform the high-choreography of the early performances. Instead, a man from the crowd joined her on stage and they pantomimed a sort of quasi-sexual pursuit for which the man mockingly apologized to his wife and the crowd on several occasions to great laughter. 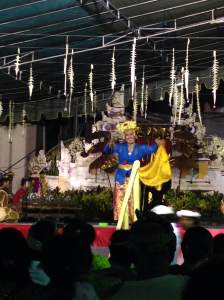 Ibu Wayan sans partner. Note the “elaborate” setand the microphones hanging down from the rafters.

The first woman ‘hosted’ three men in the same fashion and another danced with two before our Ibu Wayan finally took the stage with the audience well warmed-up and full of laughter. As Ibu Wayan’s second date was leaving the stage, I was asked if I wanted to join in. Now my hesitance at performing on stage goes back to early childhood when I hid under the table at Epcot Morocco rather than even chance an encounter with the in-house belly dancer. Once again it ruled the day and I politely refused participation with only minor pangs of regret.

All told it was an enjoyable and marginally educational evening. I didn’t learn much about the dances themselves but the fact that Balinese society has an easy sense of humor, even when it comes to one of their most storied traditions, was certainly on show. And I realized that I’m still afraid of dancing on stage with women.