Highlights and Lowlights from an Indonesian Awayday

This was going to be my post last week but Sidd’s death while I was away obviously took precedent.

If you’ve been following my work over the past several months, there is one subject that I’ve written about more than any other: Indonesian football. Last weekend I was away with a group of fellow Bali United supporters (aka Semeton Dewata) on the first leg of their quarterfinal tie with Arema Cronus, the team from Malang in East Java. I’m not going to go too in depth because I’ll hopefully be putting together a larger piece for publication elsewhere in the not-too-distant future. But I still thought I’d share some highlights and lowlights. We’ll start with the latter.

After that bus trip, you better believe I’ll be making the hour ride up to Stadion Kapten Dipta for the decider this evening. I’ll make sure to keep you updated.

Hi my name is Rowan and I’m addicted to playing sports. I first got hooked probably around the age of eight or so and have been pretty consistently playing some sport or another since. When I don’t play sports regularly I get grumpy and depressed.[i] I don’t mean to make light of actual addictions but I’m pretty sure this is one of mine so when I moved to Jakarta in January, I pretty quickly looked up, hunted down[ii], and joined a pick-up basketball game on Mondays and Thursdays in Hall C of the Gelora Bung Karno[iii] Sports Complex in the Senayan neighborhood of Jakarta.

The GBKSC – apart from a number of basketball, badminton, and tennis courts, a swimming complex, minor football pitches and a plethora of other facilities and stadiums- houses the Stadion Utama Gelora Bung Karno (Gelora Bung Karno Main Stadium), the home of the Merah-Putih.[iv] The complex was built for the 1962 Asian Games with a generous grant from the Soviet Union and from the look of Hall C, hasn’t been funded much since.

The gym was hot and tight and the floor was something hard that I’d never seen a gym-floor made of before (and I’ve seen a few gym-floors in my time) but the competition was decent[v] with some impressively skilled players- some of whom took full advantage of their home-court rims, and I met a few good guys including a couple Americans that were working in JakTown. I was just getting into a rhythm and getting some good runs in when we[vi] decamped to Bali, leaving both our little three-room apartment in Kalibata City and Hall C behind until the next time I’m in Jakarta on a Monday or Thursday.

Fortunately, upon arriving in Bali I walked right into the Bali Pugs Football Club (est. 2009). Our trial visit to Bali happened to coincide with the playing of Super Bowl XVIX and I watch that glorious occasion with a fellow from Seattle who has lived in Indonesia since 1999 but during that time has kept up impressively with the North American sporting landscape. He also co-founded the Pugs six years ago and has been co-captain ever since.

I’ve played futsal[vii] with the Pugs for the past two months and, while we had a beach soccer (which is a stupid sport and one of the few I really don’t enjoy) tournament last month and a few challenge matches over that time, tonight (Friday, the 24th of April, Year of our Lord 2015) is our first competitive tournament, so I’ve written this to kill the time until I need to put on the sacred Orange and White and head to Sanur Futsal for our 1900h kickoff. So there you go, first post. And, omitting footnotes, under 500 words. PFL. 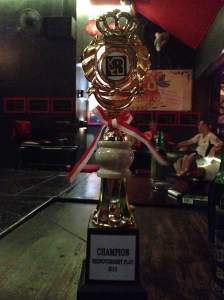 [i] Quick anecdote: After Nadia and I moved to Bali we were heading back to Java for a weekend and I tried desperately to time it right so I could go. I forget exactly why but I ended up not being able to and was grumpy for much of the trip because of it. I think the sign of a true addiction is when it starts affecting those around you so, ya. I think we’re there.

[ii] Quite literally had to hunt down… The first time I went looking for the GBKSC, Google sent me to another Bung Karno Sports Complex about a kilometer away (which, in Jakarta’s traffic, can take an hour if you’re unlucky) and I had to take another taxi and a then walk 15 minutes to find the right spot.

[iv] The Red and White, Indoesia’s national colors and the nickname of their national football side.

[vii] This is really all that Indonesians play for lack of better facilities. It’s five-a-side including a keeper and played on a pitch the size of a basketball court that’s made of the rubber-pellet turf stuff that leaves you with little black spots all over even after you shower.